WHICH TYPE OF WEIGHING SLING IS BEST?

A weighing sling is a vital piece of fishing equipment on the bank. Of course one of the main reasons you are fishing is for bragging rights for the size of fish you have caught, isn’t it? Just kidding, the best way to weigh your fish is by using a weighing sling. If you don’t really care what size the fish is, then it isn’t necessary to have one, but it’s nice to know you have beaten your personal best, right?

To me, the weighing sling is a must-have item on the bank to ensure I am caring for the carp correctly. Of course, carp care is one of the most important aspects of carp fishing.

If you are going to weigh the fish, you’ll need a sling to hold it in. You can get weighing slings with zips on and massive ones for massive fish such as catfish and large carp. My very first sling when I started out, was just a cheap sling from Argos, it was OK for the fish I was targeting then, generally doubles or less, it held a 17lber fine. But, now I am targeting carp upwards of 20lbs, I have purchased a better sling which has lasted for years now. My new sling is the XL version, so it has plenty of space to fit the larger occupants of the lakes I visit, as well as straps to allow me to securely hold the fish when weighing, but also zip to make sure the fish can’t slip out and injure itself.

Make sure you thoroughly wet the sling before putting the fish in it, and zero the scales to allow for the weight of the wet sling – no cheating!

One word of warning, as well as fishing nets, weighing slings can really smell once they have been used, so it’s worth getting a stink bag similar to the one in this photo at the same time as buying a weighing sling. This will save your car from stinking on the way home and save you from getting in trouble with your partner so well worth buying. 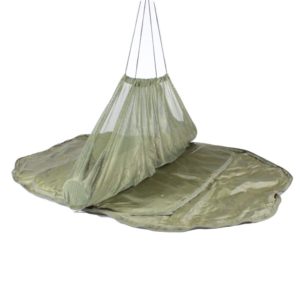 There are larger versions available too if you hunt for large carp or catfish.

To make your life easier when weighing carp, you could use a weighing tripod.

Weighing tripods are usually set up at the beginning of the session and left up to be used when weighing fish.

There is a hook at the top of the tripod to hang your weighing scales and weighing sling from it, this will save your arms from shaking and aching when trying to weigh the fish.

These are especially useful for weighing large carp, particularly if you happen to catch a catfish.

Tripods are also available with extendable legs, which are also worth considering.

A weighing is very similar to a tripod but can be thought of as a monopod as it has only one single leg that you rest on the floor, then lift the carp up on the other end to weigh it.

In my opinion, a Weighing T-bar is a must-have item. It gives you a better grip when using weighing scales. Most weighing scales only have a look on the top, which are difficult to hold when weighing carp or catfish. A weighing t-bar hooks onto the weighing scales and is padded to make it easier to get a good grip.

Is a weighing sling necessary?

A weigh sling is an essential part of any fishing operation for catching large fish, such as carp. It can be used safely and accurately to weigh your catch, and it can also help transport them out of the water.

What unhooking mat would you recommend to go with my fishing weigh sling?

We currently prefer the Avid Carp Cradle. The removable floats on both ends of the AVID Sling allow it to be used as a standard sling instead of a floating one. This is one of the few products that have this feature, and it’s very useful in situations where floatation slings are not allowed.

What other carp care equipment do I need?

When it comes to fishing for large fish, such as carp, you should have the necessary equipment to care for them. Some of these include a large landing net, a padded unhooking mat, a cradle, a weigh sling, and a propolis treatment.

Since carp are not naturally out of the water, it’s important that we keep them wet while we’re taking photos of them and weighing them. This can be done by wetting all of your equipment, such as the weigh sling. In the summer, it’s also important to keep the weigh sling cool to prevent it from getting hot. This can be done by simply getting a bucket of lake water and pouring it onto the sling and cradle, or dipping it into the water.

How to prevent KHV spread with my weigh sling?