Carp Care – How To Care For The Fish Once Caught 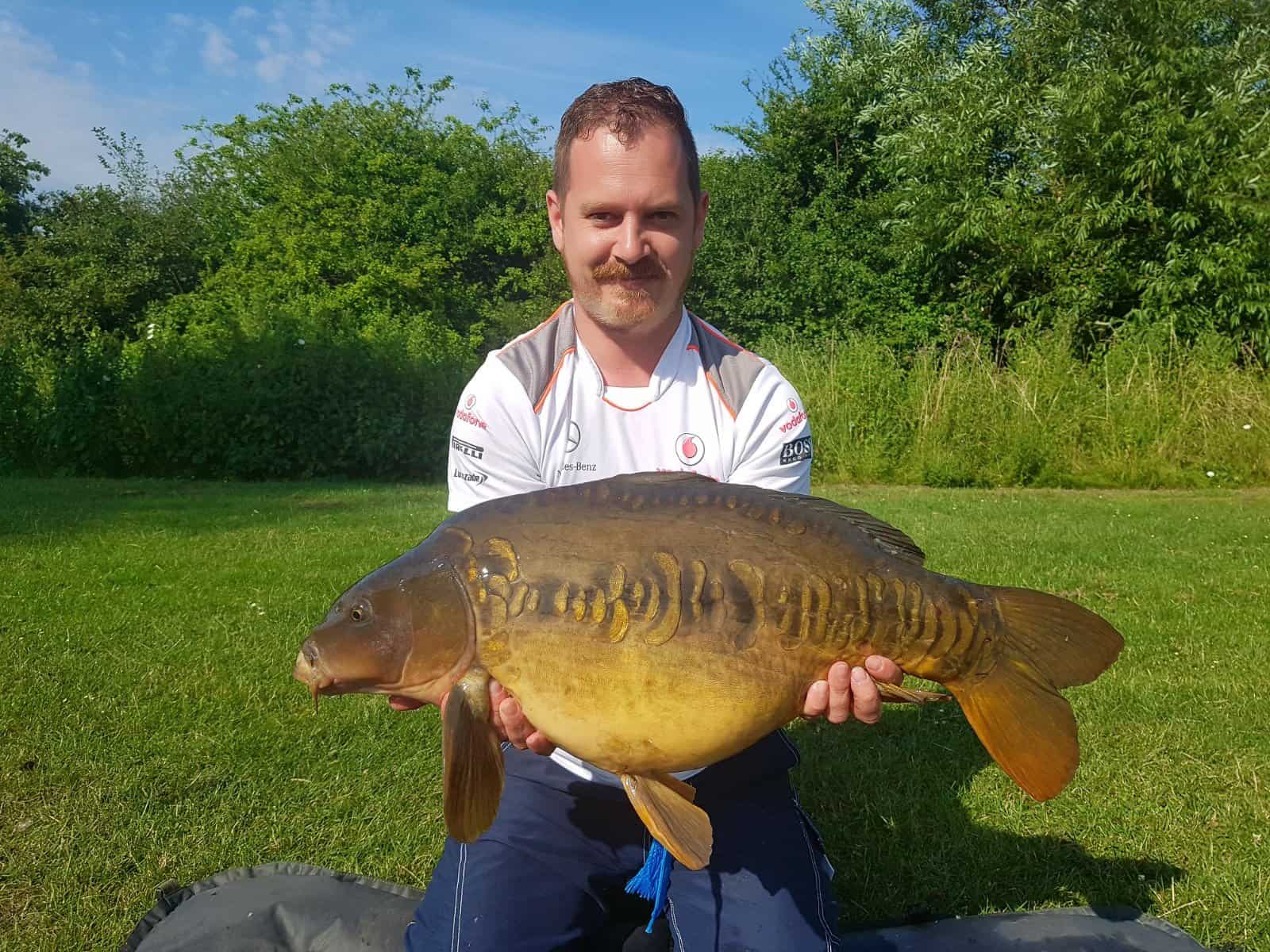 So, we need to talk about carp care. How to safely lift carp out of the water, how to weigh them and how to return them safely to the water.

Before any lines go in the water at the start of a session, we need to make sure that we are organized, forceps, antiseptic, scales, camera, mats, slings, are all prepped, with a bucket of water to keep the carp wet while it is out of the water.

As soon as we’ve caught a fish, we need to safely secure them, I normally do this with a bank stick and push the bank stick through the spreader block of the net, then the carp can’t charge off and drag the net away into the lake. You don’t want to put the net too close to the bank though, I see some anglers pull the net right back over the edge of the swim and it means the carp is very tight to the bank and if it moves around while in the net, it could bump into the side of the bank and damage its scales, or even worse, wound itself. Next, we need to wet the weighing sling, make sure it is properly soaked and the mat is wet as well. Then put the sling onto the scales, zero the scales with the wet weighing sling hanging from them, but before we get the carp out the water with a sling at the ready, we can break down the net, by removing the net arms from the spreader block and then slide the carp, while still in the net into the sling. It is much safer for the carp using this method as having the net inside of the sling is a safer way to transport the fish, it is also very important to check the carps’ fins are flat to the body of the fish before we put any load on the sling. Once we’re happy gently lift the carp out of the water, letting as much of the water drain off before we actually transfer it onto the mat.

Always move the mat close to where you’re going to take the fish out the water, you only want to move it a few feet, there’s absolutely no excuse to be carrying a fish 20 meters across the swim. As soon as the carp is safely on the mat, we can unfold the net. The first thing we need to do is to get the hook out of the fish’s mouth. Most of the time you should be able to do this with your fingers and thumb, there is a bit of technique involved, but a combination of thumb and index finger applying pressure in the right way and that those hooks should just pop out nice and easy. With barbed point hooks, you need to remember the hook has got to come out the way it came in so you need to basically roll it towards the point and apply pressure until it pops out, although you may need forceps to get a good grip on the hook.

Move The Net Away

Bucket Of Water To Cool The Fish

In hot weather it’s paramount that you keep the fish as cool as possible and work quickly, so if necessary pour lake water onto the carp from the bucket to keep them wet and cool.

Now, the exciting bit, we are ready to find out the weight of the fish. It’s preferable to weight the fish first before taking photos because it gives them time to settle when they are in the sling. Try and zero the weighing scales with the wet sling before you attempt to move the carp, ideally, you should get a mate to weight them while you are tending to the fish and making sure it doesn’t flip off of the mat. Once you have recorded the weight, transfer the fish back onto the unhooking mat or cradle to take the photos, making sure the fish is always kept close to the ground whenever it is being moved.

If The Fish Flips

Have a wet towel nearby as covering up the carps eyes is the best way to calm it down if it starts to flip on the mat, typically, the fish will tense up before it starts to flip, so keep an eye on it at all times. If it starts to flip, hold it firmly down on the mat, it will stop after a short while, just make sure it can’t flip itself off of the mat as that is when you could cause the most damage to the fish. If the fish starts to flip while you have it lifted, tilt it back towards you and let it rest on your arms until it has stopped, try not to cover it with your body because your clothes will remove the mucus on the fish’s body, but also try your hardest not to drop the fish as you will cause damage to the fish.

How To Use The Carp Care Kit

A very important part that often goes overlooked is using the different fluids for the body and the mouth, we’ve all seen it, you catch a fish with a barbed hook even micro barbed hooks can tear the fish’s lip, especially if you’re playing the fish with a little bit of pressure, trying to stop it running into a snag, or just from fighting in the water when the fish is resisting your line trying to go the opposite direction. It’s going to happen from time to time, then you have the rocks, trees and everything else that may be in the lake itself that could rub against the fish when you are fighting with it, a scale might get damaged or the fish could get cut when trying to get away. 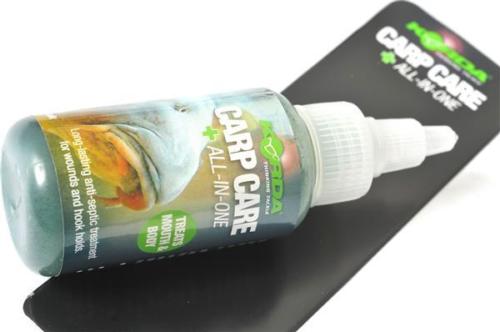 This could happen from the time the fish tears off to the time you get it on the mat. Korda sells carp healthcare kit which helps seal the wounds and stop infections. When you open up the bag, you’ll see it has two different liquids, it also comes with a yellow container of Q-Tips to apply the fluid and then also you have the mouth care liquid and also the body care liquid. Depending on where the damage if, all you have to do is squeeze a few drops onto the Q-Tip and massage the Q-tip into the area that is damaged and the surrounding areas close to the damage.

Putting The Fish Back

To put the fish back, whilst in the sling, make sure the fins are back, flat against the fish’s body and lift the sling to transport the fish back to the water.

Lower the fish back into the water, but you will need to give the fish time to recover. Open the weighing sling and lower the front of it away from the fish’s face and make sure the fish is facing the way you want it to swim away, usually the middle of the lake. The fish will probably be laying flat at this point, so while keeping hold of its tail, take the sling away and give the fish time to recover, it will at this point, either swim away by itself, or you may need to get it upright. So by holding its tail, with your other hand supporting the front of the fish, pivot the fish so it is upright, then give it time to recover. It could take up to a minute, but it will eventually swim away.

Prepare For The Next One

You’re not finished yet though you need to prepare your gear for the next catch, you need to top up your bucket with lake water, put your net back together if you haven’t already and put the rest of the gear where you can get to it when the next fish is in your net.