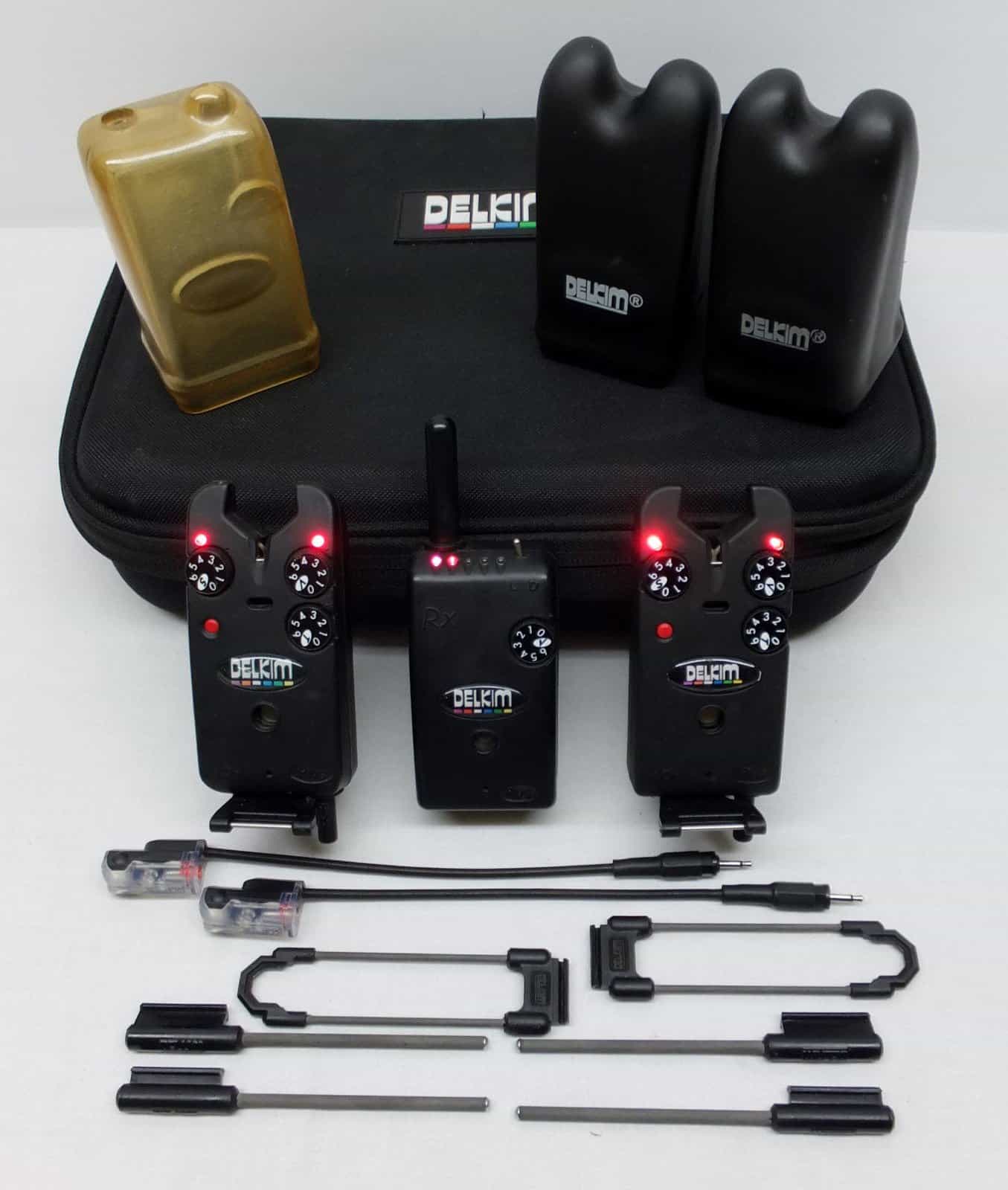 We’re going to look at how to set up a Delkim receiver now but before we start, the Delkim RX receiver has got 6000 hours of battery life, if you compare that to a lot of the other buzzer receivers, you might get a weekend out of them if you’re lucky. 6000 hours if you use it correctly, this is why I personally only use Delkim bite alarms.

How To Set Up A Delkim RX Receiver

So I’m turning it on for the first time put the toggle switch on to “L” which is local and you will feel it vibrating. That’s one of the other features, so for you guys that are hard of hearing out there, you can have it underneath your pillow and it will still wake you up. So if I now pull the line through the buzzer, it’s not coming through on the receiver at all, same with the other buzzers if I pull on the line because they are not yet programmed. What we need to do is, at the back of the receiver, there’s a little tiny button and I need to press that just once and that will go all the way through the light range on the receiver. The first little LED will flash, which is the purple one, I haven’t got a purple buzzer so what I’m going to do is press it again and it will move on to the next color.

The next color is the red one, and I do have a red one so if I pull the line on the red buzzer,  the receiver will pick up that signal, the receiver will beep to confirm it has picked up the signal. We’ll then move on to next color which is a white one. I also have a white one, so I pull the line on the white one, the audible tone bleeps again to confirm it has worked.

The next one is a blue one, I, like most people I have got blue Delkims as that’s the most popular color, so pull the line, hear the tone and on to the next one. The next one’s green which I don’t have, so I press the little button on the back to skip this color, then the last one is the yellow which when I pull the line, the receiver bleeps again and it’s done. So it basically goes through the colors then you’ll hear the double bleep which is the anti-theft alarm, which I’ll explain now.

If you are experiencing a problem with a Delkim product:

Check that you have a good battery/connection.

If your alarm is being affected by water, then it needs to be re-waterproofed. This should happen in order to prevent it from happening in the future.

If you are having issues with your sensitivity settings, then it’s important that you are using the correct settings. If the sensor is missing or broken, then it should be sent back to Delkim for repair.

The receiver comes with the Anti-theft alarm activated as standard, although, it can be switched off if you don’t want to use it. When it is switched on and let’s say you are asleep in your bivvy, if someone comes up and switches the transmitter off, the receiver will make a noise like a police siren, if you pull the buzzer, nothing is going to happen, the receiver will keep sounding until the receiver gets turned off. So if that’s a really good feature, but you can turn it off if you want to so let’s look at how to do that.

All you have to do is just press the little button in on the back, flick the toggle switch to turn it on and then immediately take the button off. That will arm itself for the buzzers and it’s vibrating in my hand so the vibration system is still on, but if we go to the buzzer and turn it off, you won’t hear the anti-theft alarm, so it’s turned off. To reverse that you just do exactly the same thing, turn the receiver off again, press the button down, turn it on and then take your hand away straight away and it will reset it.

So let’s show you how to turn the vibration off. So turn it back off again put your finger on the little button, turn it off for two bleeps and then take it away. Again, you’ll hear the little tune, which means it’s programmed for the buzzer, but it’s not vibrating, burglar alarms not going off so they are both turned off. But if you want to reset it again, just reverse it so turn it off, press it down, turn it back on for two pips and then it’ll put the vibration back onto it again.

If you mess up whilst trying to set up a delkim receiver, and you want to clear it completely back to nothing, turn it off, press it down, when it does bleep, take it away, give it a couple of seconds, press the back button again it will beep again and that’s cleared it back to the default settings, which is vibration and burglar alarm on, but none of the buzzers actually programmed into it. So let’s do that now so pressing it down until it beeps once, press it down again so it bleeps again and take it away, it’s vibrating in my hand and it’s ready to go, so if I start again now, I can program all those buzzers in again.

Now, I’ll show you how to program all of the buzzers onto one single light on the receiver. So, first of all, turn the receiver on as normal, you’ll feel it vibrate, then hold the back button down until you get one pip and then release it. When it beeps over and over, it means you can program more than one head into that same color on the receiver. I’ve got blue heads on there so I want to move through to the blue on the receiver, so I just press it again to red, white and then blue. Once one the blue light, just activate the first buzzer by pulling on the line, it will sound a double beep, but stay on blue, so I do the next one by pulling the line. So you should see the receiver flashing 3 times at this point, if you program another one in, that will be number three, so when you actually get a bite, it would actually flash three times on the receiver. If you have more heads the same color, you could add more to you blue light, or if you have more colors, press the little button on the back to go to the next color. So if you wanted a program 24 heads into one receiver you could do it.

And for those of you that I’ve not seen them yet, these are the moon night lights from Delkim. They are an updated version they’ve changed the cord so it hangs absolutely beautifully, the extra wire that goes through that, is going all the way through the middle so there’s no battery required for the actual head itself it runs off the Delkim battery, it doesn’t drain hardly any power so it’s not going to reduce the battery life and whatever’s going on at the buzzer, is going on in the head as well. So if I pull the line, the buzzer will sound and the night light will light up too. If you’ve got night marking on the buzzers, you get night marking on the heads as well. 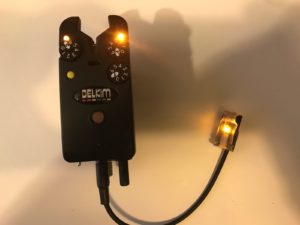 The line clip attachment is an ingenious thing they’ve done, which they have patented it’s got one ball bearing on one side and then a magnet on the other side. It’s totally non-corrosive so they do not rust up or wear out and they hold together under the same tension every time. So whether you are using thick mono or very thin braid, it will still hang on their perfectly. Just pull on the line slightly and it will just click and through comes the line. Then on the bottom of the nightlight, you will see there’s a thread in there and any of the hanger weights that you use on normal hangers will screw into there, so you can add extra weight to stop them going off if it’s very windy. Then to complete the set, there’s a pivoting hanger support to go with it called a duo carb, so I’m going to attach those underneath the buzzer and show you how they work.

The duo carb basically clips in straight underneath the Delkim head and they’re basically designed to move up like and normal hanger. There’s a little groove on the hanger, there will actually be attachments for other heads from other bobbins if you want to use them with them, but obviously, it’s designed to be used together. 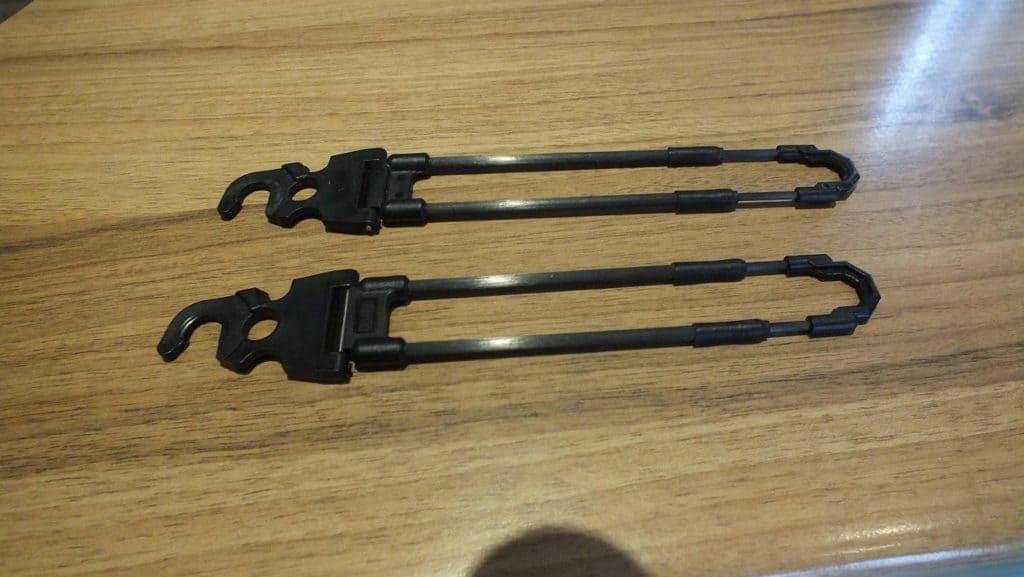 You can extend the arms out if you want it’s all made of carbon so it weighs absolutely nothing.

It has hardly any effect on the actual weight of the bobbin and you will see that you will get a perfect up and down movement. It also minimizes the side to side swinging.

If you’re fishing big lakes and it’s really windy and they are swinging from side to side, giving the odd false bleep, it’s not going to happen at all with these.

One other little feature with them, you can shorten the arms up and just slacken them off, you can actually fish a completely slackline on them, the line can go completely slack, so if you want to fish the slackline but then when you get a bite, it obviously it all tightens up and gives you brilliant indication.

Night lights are available in all the different colors so if you want something to match your Delkim perfectly you can buy matching colors.